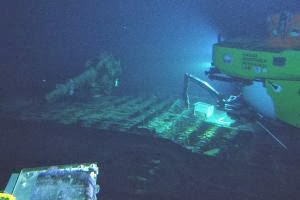 Only days before the 72nd anniversary of the Pearl Harbor attack, the secret weapon of the Japanese admiral who planned the "Day of Infamy" has been found and positively identified at 2,300 feet in waters off Oahu.

Research teams organized by the University of Hawaii at Manoa made the formal announcement Tuesday that the wreck on the Pacific bottom was the I-400, a submarine aircraft carrier that was the brainchild of Isoroku Yamamoto, the Japanese Marshal Admiral and commander-in chief of the Combined Fleet during World War II.

Yamamoto was the architect of the carrier attack that killed 2,300 and devastated the U.S. Pacific fleet at Pearl Harbor on Dec. 7, 1941.The attack began 1,351 days of war and triggered major innovations in military technology that included Yamamoto's vision of a fleet of super subs that would hit the Panama Canal and even New York to demoralize Americans and slow or even stop the U.S. advance across the Pacific."Had they been able to affect those strikes, it would have been a different war," said James Delgado, director of the National Oceanic and Atmospheric Administration's Maritime Heritage Program.

Yamamoto wanted a fleet of 18 super subs but the I-400 and two sister ships were the only ones ever built, Delgado said. At 400 feet, the Sen-Toku class 1-400 dwarfed all other submarines of the age and its range of 37,500 miles was not matched until nuclear subs were developed in the 1960s.

The 1-400 and its sister ship the I-401 each had 150-foot hangars built into the hull to accommodate three folding-wing M6A1 Seiran bombers for hitting the U.S. mainland with a 1,800-pound bomb. The pontoon-equipped Seirans were to be launched by catapult from the sub's deck and then be hauled back aboard by crane.

However, the subs were never used as intended and were mainly consigned to hauling fuel to Japanese bases, Delgado said.

Terry Kerby, a veteran underseas explorer who piloted the research sub that found the I-400, said U.S. prize crews were stunned to come across the super subs when Japan surrendered to end the war.

The 1-400 was one of five Japanese subs brought back to Pearl Harbor at the end of World War II to be studied by the Navy, but they were soon caught up in the just-beginning Cold War with the Soviet Union.When the Soviets in 1946 demanded access to the subs under terms of the treaty that ended the war, the U.S. Navy sank the subs off the coast of Oahu and claimed to have no information on their precise location. Kerby has now found four of the five scuttled subs.

"The I-400 has been on our ‘to-find' list for some time," Kerby said. "It was the first of its kind of only three built, so it is a unique and very historic submarine. Finding it where we did was totally unexpected."

Delgade and NOAA archeologist Hans Van Tilburg joined Kerby on the Aug. 1 dive aboard one of HURL's Pisces deep-dive submersibles that found the I-400. The announcement of the find was delayed until this week while NOAA verified the identification with the State Department and the Japanese government.

"All our research pointed to it being further out to sea," Kerby said. "The multi-beam anomalies that appear on a bottom survey chart can be anything from wrecks to rocks—you don't know until you go there."
The I-400 was truly revolutionary, Delgado said.

"The innovation of air strike capability from long-range submarines represented a tactical change in submarine doctrine," he said. "The large I-400, with its extended range and ability to launch three M6A1 Seiran strike aircraft, was clearly an important step in the evolution of submarine design."
at Tuesday, December 10, 2013