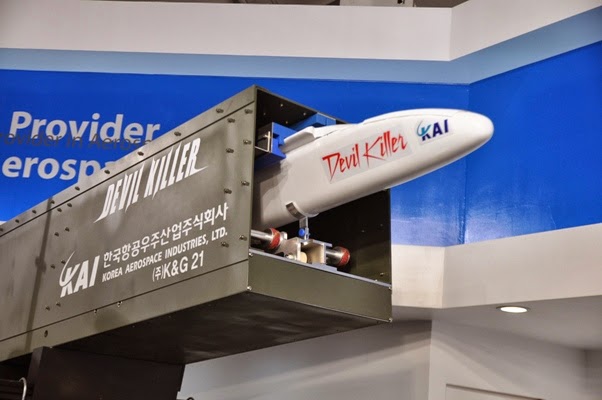 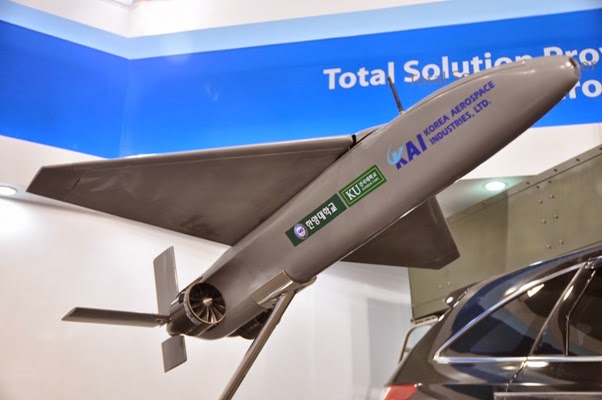 Korea Aerospace Industries (KAI) is marketing a small unmanned air vehicle (UAV) which can also be used as a precision munition as a viable maritime capability deployable on board naval vessels.The 'Devil Killer' UAV could previously only be launched from ships with the aid of rocket boosters. However, the company has now introduced a canister containing a compressed air mechanism to provide the initial launch thrust required to enable the system to become airborne. This thrust capability enables the system to be deployed at sea. Once launched, switch blade wings unfold and two electric ducted fans take over the propulsion task for the rest of the flight.

Speaking to IHS Jane's at the Singapore Airshow on 14 February, KAI's senior manager and chief of international marketing Jei Yai Moon said that the company is now marketing the UAV as a munition that feasibly can be deployed at sea as well as being an effective land-launched system."The Devil Killer UAV is ready for production. Unfortunately we do not have a customer yet. We will continue to market it", said Moon.

Described by the company as a "tactical suicide combat UAV", the Devil Killer is designed to loiter above potential targets. The UAV would be guided by an operator onto its designated target using a video data link and would then crash itself onto the target, detonating a 2 kg payload located between its wings.The Devil Killer is 1.5 m long and has a wingspan of 1.3 m. It weighs 25 kg when armed and has demonstrated in-flight top speeds of 400 km/h. It has a maximum range of 40 km.
at Wednesday, February 26, 2014