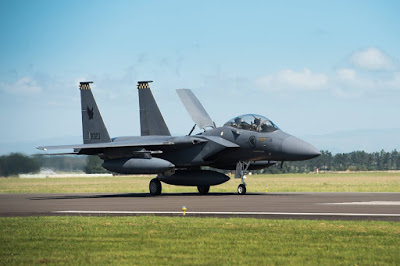 New Zealand will continue to evaluate the proposal for Singapore's F-15 jets to train at Ohakea Air Force Base in New Zealand in the long-term, the defence ministers of both countries said in a joint statement yesterday.

This was among the developments at the second annual Singapore-New Zealand Defence Ministers' Meeting in Auckland.

At the one-day meeting, Defence Minister Ng Eng Hen and his New Zealand counterpart Ron Mark reaffirmed the deep defence ties between the two countries, Mindef said in a statement.

In August last year, The Straits Times reported that Singapore had asked the New Zealand government about accommodating F-15SG fighter jet training in Ohakea in the long-term.

According to earlier New Zealand media reports, a move was mooted to deploy a squadron of F-15 fighters at the airbase.

The New Zealand Herald reported that up to 500 people could be stationed at the base in Manawatu on the North Island.

New Zealand hosted Singapore for flying training from August to September last year. The Singapore air force sent six F-16D+ fighter jets, as well as support equipment and personnel to Ohakea for an exercise. In the statement yesterday, Mindef said the Singapore Armed Forces (SAF) and the New Zealand Defence Force agreed on further cooperation at the meeting.

This would take place through air force staff talks, an education and training working group, and an operational working group.

Mr Mark, who as Defence Minister was meeting a South-east Asian counterpart for the first time, in the joint statement said Singapore is New Zealand's closest defence partner in South-east Asia.

The most recent one was in Iraq as part of the coalition against the Islamic State in Iraq and Syria.