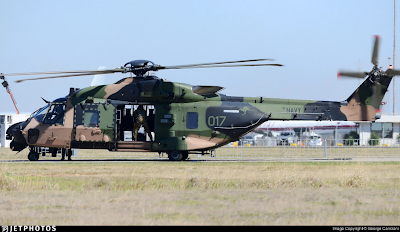 A report in Fairfax Media says a Navy MRH 90 was flying from the LHD HMAS Adelaide off the Queensland coast to Brisbane recently when it experienced the vibration, causing it to make a precautionary return to the ship.

“The aircraft captain aborted the mission and returned to HMAS Adelaide for a precautionary landing,” the report said, quoting a Defence spokesman. “No personnel were injured during the incident.”

The Navy operates six MRH 90s from the ADF’s larger pool, and regularly rotates aircraft back through the pool for periodical maintenance, most of which is conducted by Airbus at Brisbane Airport or a combined Airbus and Army team at Townsville. The aircraft are operated by Navy’s 808SQN at Nowra, and Army’s A and B SQNs of 5 Aviation Regiment (5Avn) at Townsville.

The grounding follows an ABC report last month which revealed Project AIR 9000 Phases 2, 4 and 6 which resulted in the acquisition of the MRH 90 in three batches to initially complement and ultimately replace Army’s S-70A-9 Black Hawk and Navy’s Sea King helicopters, remain on the Government Projects of Concern list.

The MRH 90 was originally scheduled to have been declared fully operational (FOC) in 2014, a milestone which, despite improvements in aircraft availability and sustainment in recent years, is still yet to be formally achieved. As a result, Army has been forced to retain about a dozen Black Hawks for the special operations support role some five years beyond their originally planned retirement.

The grounding will likely have a significant effect on the ADF’s ability to provide airborne assault and logistics support to the multi-national Exercise Talisman Saber currently underway off central Queensland.
at Thursday, July 25, 2019