First Flight of A320CJ for the RTAF 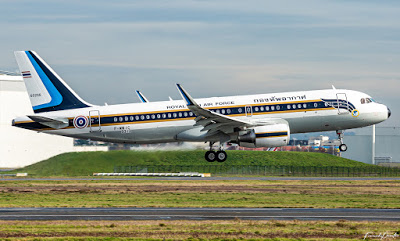 On Friday 31 January a new Airbus A320CJ for the Royal Thai Air Force made its first flight from Toulouse.

The order for the aircraft, called Airbus A320-214CJ in the certification papers and L15K within the Royal Thai Air Force, was announced in March 2019.

The aircraft will join the VIP-fleet of 602 squadron.
The squadron is based at Don Muang near Bangkok and has a fleet consisting of one Airbus A319, two A320s (excluding the new one still at Toulouse), one A340-500 and three Sukhoi SSJ100s.