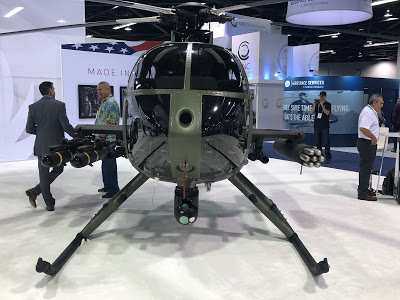 Many visitors have called helicopter is Little Bird, due to its resemblance to the legendary version of modified OH-6A.

The MD 530G BII with the all-glass digital cockpit on display at MDHI’s HAI Heli-Expo booth features the ESL Integrated Weapons System and be configured with both precision strike and suppressive fire munitions including a twin Hellfire launcher, M260 7-shot 2.75” rocket pod for laser-guided and unguided rockets, and two M134 7.62mm Mini-guns.