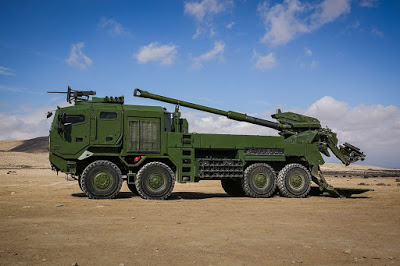 An order has been placed for 155mm Howitzer, Self-Propelled System Acquisition Project for the Philippine Army under Armed Forces of the Philippines (AFP) Horizon 2. This was revealed by MaxDefense Philippines.

MaxDefense said it “got confirmation that the Philippine Army has finally ordered the ATMOS 155mm/52cal. wheeled self-propelled howitzer from Elbit Systems Land and C4I, as part of the Philippine Army’s 155mm Howitzer, Self-Propelled System Acquisition Project under the Horizon 2 phase of the RAFPMP.”

“Deliveries are expected to be completed in 2 years time, or less,” it noted.

“Actually, the Revised Armed Forces Modernization is for all, not only for the Air Force and Navy, including the Army. We have different Horizons so right now we are in the Second Horizon to procure equipment so it’s ready, the President has allotted funds for the procurement of like modern equipment, like self-propelled artillery, this will be used in the territorial defense, right now the Army is contemplating to buy one land-based system, we have already upgraded our air aviation, from [Army] Aviation Battalion, it will be upgraded to Aviation Regiment wherein our Army will have its own helicopters to support its ground forces,” Colonel Manuel said as quoted by PNA in August 2019.