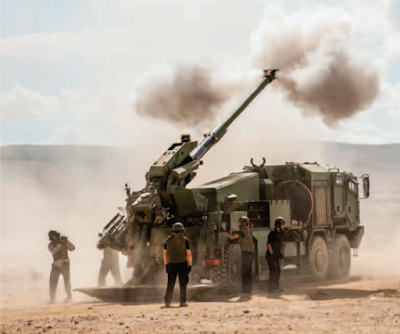 The Philippine Ministry of Defense (DND) is about to conclude the negotiation period and enter into an official signing with Israel of the ATMOS self-propelled artillery.

The ATMOS L / 52 155mm self-propelled gun is manufactured by Israel's Elbit Systems. On May 6, Philippine Defense Minister Delfin Lorenzana announced that the country would spend US $ 47 million to buy ATMOS self-propelled artillery systems.

The deal was also confirmed by the Israeli manufacturer and said Elbit Systems would be responsible for delivering 12 complete ATMOS systems with ammunition and spare parts included. According to the plan, the contract will start in April 2022.

With the presence of ATMOS, Filipino artillery improved its offensive capability far more than before when this weapon had just performed a ground attack mission and did a very good job of sea defense.

To accomplish its dual mission, the ATMOS self-propelled gun is designed to be able to fire all 155mm NATO standard artillery shells, the range of the L15 HE shell is 30km and up to 41km if used. Use bullets to increase range.

The entire artillery system has a mass of 22 tons and thanks to that, it can be easily transported by C-130 transport aircraft, 6-man fighter crew, firing rate of 4 - 9 rounds/minute, speed. Maximum fire of 3 shots/20 seconds.

What makes ATMOS special is its ability to fire multiple bullets at the same time. The principle of this feature is that the cannon automatically adjusts the angle of firing from high to low so that the bullets hit the target almost at the same time, thereby creating tremendous damage.

Thanks to these superior features, Army Technology has ranked ATMOS in one of the 10 most effective self-propelled howitzers in the world today. Thanks to this feature, ATMOS can blow solid targets or sink large warships.

In Southeast Asia, ATMOS cannon is being fitted to Thai artillery.