US, Australian Firms in Talks for Possible Take Over of Hanjin’s Subic Shipyard 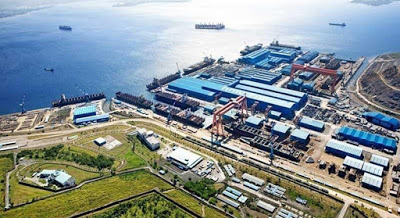 American private equity firm Cerberus and Australian shipbuilder Austal are in final negotiations with authorities and banks for the take over of South Korean shipbuilder Hanjin’s shipyard in Subic, One News reported citing Philippine Navy chief Vice Admiral Giovanni Bacordo.
“I was told the companies were about to complete due diligence and final negotiations before the outbreak of the coronavirus, which could delay the process,” Vice Admiral Bacordo said as quoted by One News.
The Navy chief noted that the deal could lead to establishment of repair facilities for United States Navy ships.
Vice Admiral Giovanni Bacordo said that Cerberus owns DynCorp, a military contractor and global service provider.
“There is a possibility the US Navy will move back its ship repair facility to its old home in Subic if the deal goes through,” Bacordo said.
He also said that “many of the workers in Hanjin had also worked in the US Navy base. Subic has one of the best port facilities in the world, with deep and secure harbors.”
The Navy chief also said that they prefer close allies to take over the facilities in Subic.
at Thursday, May 14, 2020