Quite rare! Two Không quân Nhân dân Việt Nam (Vietnamese Air Force) Su-30MK2V Flankers, serial 8536 and 8540, equipped with Vympel R-27 air-to-air missiles. The fighter aircraft were seen on recent footage from the Đồng Nai provincial online newspaper. Both Sukhois are part of the 935th Fighter Bomber Regiment based at Biên Hòa Airbase in Dong Nai Province, some 35 kilometers from Ho Chi Minh City.
Vietnam first signed a contract for the procurement of four Sukhoi Su-30MK2 fighter aircraft in 2003. This was followed up by two other deals with Sukhoi in 2009 and 2010 for the purchase of eight and twelve additional fighter jets respectively. The final contract between Moscow and Hanoi was signed in 2013 and involved a batch of twelve aircraft for USD 600 million.
The Vympel R-27 (NATO reporting name AA-10 Alamo) medium-to-long range range air-to-air missile was developed by the Soviet Union in 1983 and is capable of speeds up to Mach 4.5. Each missile weighs approximately 250 kilogram, while its war head has a mass of almost 40 kilogram. 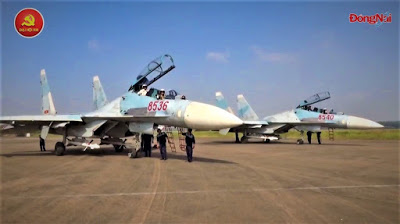 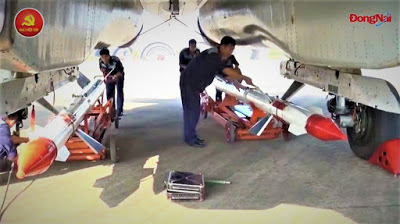