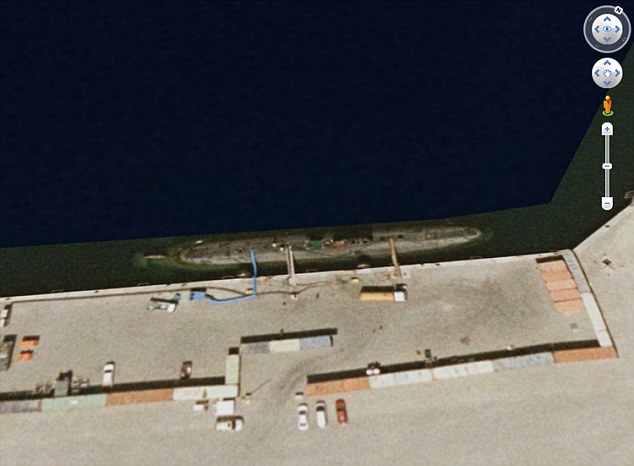 A British nuclear submarine has been caught on camera after it apparently became stricken with technical problems while on a top-secret mission in one of the most dangerous parts of the world.
Satellite images show the Royal Navy vessel undergoing repairs at a port less than 100 nautical miles from Iran.The nuclear-powered submarine is pictured docked at Fujairah, one of the United Arab Emirates, in the politically sensitive seaway of the Gulf of Oman.

Blue cabling on the quayside apparently provides electrical power to the vessel while it is being repaired.The images also show a 650ft-long barrier constructed from metal containers which appears to have been erected in an effort to shield the 300ft vessel from public view and protect it from a terrorist attack.Designed to provide surveillance of enemy installations, it is one of Britain's four Trafalgar Class submarines – HMS Talent, Torbay, Trenchant or Triumph – which entered service 30 years ago and have suffered from increasing problems due to their age.

Last night, nuclear expert John Large said: 'This is a very rare sighting in these waters as they usually remain submerged for thousands of miles while performing their surveillance and listening roles in the Gulf. To be pictured on Google Earth is unfortunate from her commander's point of view.'

'Something must have gone seriously wrong with her to port there now, publicly announcing her presence in the Gulf of Oman which is effectively a war zone in these troubled times.
'The lack of a surface support vessel or any Special Boat Service commandos in dinghies patrolling the waters around her, or a boom separating her from the rest of the harbour, suggests this visit was forced upon her.'She has what seems to be an emergency electrical and ventilation hook-up from the quayside, with all of her hatches open.'The image has been stamped with a 2015 copyright marking on Google Earth, and a UK defence official admitted last night that a Royal Navy submarine had visited Fujairah earlier this year. The official said it was 'routine' for submarines to obtain shore services such as electricity and air-conditioning.

In 2013, The Mail on Sunday revealed how the ageing Trafalgar submarines had been issued with 'Code Red' safety warnings after inspectors found radioactive leaks.The report by the Defence Nuclear Safety Regulator found that cracks in reactors and nuclear discharges were directly attributable to the Trafalgars remaining in service beyond their design date.The Trafalgars are powered by nuclear reactors and are supposed to stay at sea for up to three months. They are equipped with Tomahawk cruise missiles and sonar equipment that can hear enemy vessels sailing more than 50 miles away.The submarines have a typical complement of 120 to 130 personnel, up to 20 of them officers. The Trafalgars are being replaced by Astute Class nuclear submarines.
A Ministry of Defence spokesman said: 'We do not comment on submarine operations.'