South Korea plans to purchase US weapons worth $1b 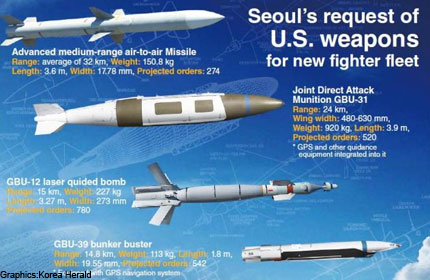 Seoul has notified Washington of its intention to purchase weapons systems worth US$800 million (S$1 billion) to be mounted on its new fleet of warplanes should a US fighter be picked for its 8.3-trillion-won ($7.4 billion) acquisition project.

The Eurofighter Typhoon of the European Aeronautic Defence and Space Company is another candidate in the competition, through which Seoul seeks to purchase 60 jets to replace its aging F-4 and F-5 jets. The winner is expected to be announced next month.
Observers said the US products would be at an advantage in the contest given Seoul considers interoperability with US forces and alliance-related factors. But EADS has made attractive offers, such as investing $2 billion in Korea's project to develop indigenous fighters.
at Tuesday, May 28, 2013 No comments: 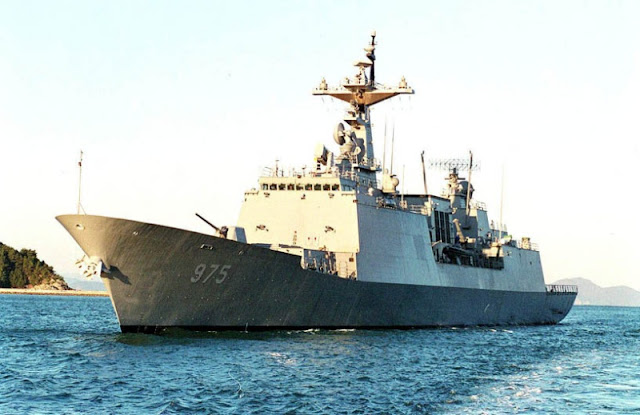 The Royal Thai Navy will ask the cabinet to approve a budget of 13 billion baht for a new frigate to be built by a South Korean shipyard.
Navy chief Adm Surasak Rounroengrom said the Royal Thai Armed Forces Headquarters is scrutinising the budget proposal and later will forward it to the Ministry of Defence. Once approved, it will be submitted to the cabinet for consideration, he said.

A navy source said the navy had set up several sub-committees to coordinate with the Korea-based shipbuilding and offshore contractor.

A navy selection committee last month chose Daewoo Shipbuilding and Marine Engineering to build the new frigate, a navy source said.
The company was one of two South Korean firms in the final round of bidding, organised by the navy panel.
Three other three foreign firms were eliminated in the previous rounds - from Spain, Italy and China.
The source said the high-capability frigate to be built by Daewoo would be based on the company’s type DX II frigate, which has a displacement of 5,000 tonnes, with modifications to meet the Thai navy’s special requirements.

The new navy ship will have a displacement of between 3,000 and 4,000 tonnes.
Navy chief of staff Chakchai Phucharoenyot, who chaired the selection committee, earlier told the media the navy also asked the company to install a Combat Management System (CMS) which can be allied to the systems already installed in the frigates HTMS Naresuan and HTMS Taksin.
The new frigate, which would be the first South Korean-built naval vessel in the Thai fleet, is expected to be ready for commissioning in two years, Adm Chakchai said.
at Saturday, May 18, 2013 No comments: