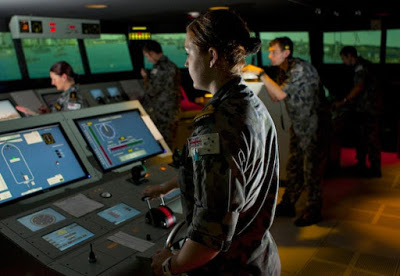 The Navy’s ability to effectively train its men and women has been given a major boost with an expansion and upgrade of its fleet of simulation trainers.

Minister for Defence, the Hon Christopher Pyne MP announced the significant investment worth more than $80 million.

A new bridge simulation trainer will be introduced at HMAS Stirling, in Western Australia, and a new command team trainer and upgrades to other simulators will be installed at HMAS Watson in Sydney.

Bridge simulator trainers mimic a real-life ship’s bridge with highly realistic scenarios. They are used to train bridge teams, and in particular bridge officers in ship navigation and handling techniques.

The command team trainer is a virtual ship operations room and uses simulated scenarios to teach personnel. It’s used to train sailors and officers in operating the ship’s combat and communications systems.

"It’s great news the Australian Industry Content on this project is around 90 percent,” said Minister Pyne.

Building and supporting the simulation trainers will sustain over 100 jobs across New South Wales, Victoria, South Australia and Western Australia.

Minister Pyne said simulators are critical in maintaining Australia’s strategic advantage and this investment will increase the Navy’s ability to effectively train our sailors and officers.

“We are committed to improving the quality and efficiency of the training delivered to Navy personnel,” Minister Pyne said.

“By expanding the fleet of onshore simulation trainers, Navy will not be limited by factors that can impact training at sea and can deliver more reliable and increasingly sophisticated training packages.”

Minister Pyne said the investments will reduce the time spent completing qualifications, moving people across the county and the training load on ships.

“The new and upgraded simulators will assure Australia’s ability to develop and maintain potent, operational-ready platforms with highly trained personnel prepared for all contingencies at sea,” Minister Pyne said.
at Friday, September 21, 2018