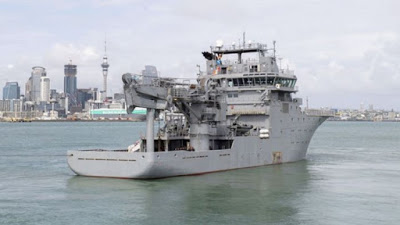 HMNZS Manawanui, the RNZN’s new hydrographic survey and dive-support vessel that will soon be ready for operational taskings (photo : RNZN)

The Royal New Zealand Navy's (RNZN's) new hydrographic survey and diving-support vessel, HMNZS Manawanui , has been placed in drydock at Devonport Naval Base to undergo final upgrades and maintenance activities.

The final upgrades include a fitting out of new communication and fire-fighting systems and upgraded rigid-hull inflatable boat (RHIB) capabilities, said the RNZN via an official social media channel on 5 May. "Once Manawanui 's out of the dock she'll be ready for operational taskings," the service added.

Manawanui was commissioned in June 2019 at the same naval base where it is undergoing dry-docking. Before its service with New Zealand, the vessel was a commercial offshore support vessel known as Edda Fonn .

The ship was procured by the New Zealand government in August 2018 for NZD103 million (USD62 million) to undertake missions formerly fulfilled by the decommissioned hydrographic ship HMNZS Resolution , and its retired namesake dive tender, HMNZS Manawanui . These vessels were taken out of service in 2012 and 2018 respectively.

The new hydrographic has an overall beam of 18 m, a hull draught of 6.3 m, and is equipped with a 100-tonne salvage crane. It is powered by four diesel-electric engines driving two azimuth propulsion systems and can reach a top speed of 13 kt.