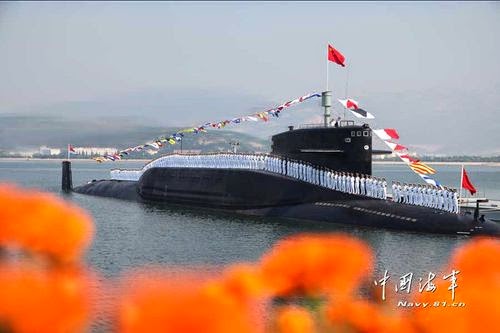 In recent years several different air-independent propulsion (AIP) submarines have entered service in China and are said to be leading the world in standards, according to Duowei News, a media outlet run by overseas Chinese.

Due to the highly classified nature of submarine technology, however, the parameters of China's AIP systems have not been fully revealed to the public, the website stated. A May 1 report in Communist Party mouthpiece People's Daily, however, mentioned that China's "new Stirling engine" was 117% more efficient than its international rivals. The first hints of the details of the engine technology have gradually emerged recently. The engine will likely be adopted by the PLA Navy's new AIP submarine.

In the April 26 edition of People's Daily, in the run-up to Labor Day, a piece entitled "The 'Prettiest Worker' Reveals Why Workers are Beautiful" included the sentence: "In the field of special propulsion systems, the Stirling engine department of the 711 research institute of the China Ship Scientific Research Center has been around for 10 years and has independently developed a completely new engine, which is 117% more efficient than similar products overseas, which puts it in the lead worldwide. It is set to be installed in China's next generation of warships."

The 711 research institute is the main research unit that develops propulsion systems for conventional submarines. One of the most advanced systems it created was the AIP system for the Type 039B Song-class diesel-electric submarine, powered with Stirling engines based on engines imported into China from Sweden during the 1980s.

According to the People's Daily report, there are several models of the Swedish 4-275 propulsion system that the country is currently exporting to overseas buyers, including a 75 kilowatt and a 110 kW model. Only the 75 kW version is being sold on the international market, however. China imported the 75 kW version from Sweden then replicated the engine and used it to power the Type 039B submarine.

As the Stirling engine is not very efficient, it is normally used for slow cruising underwater. A new electricity generating technology developed in China allows the submarine to cruise underwater and charge its battery at the same time, the website stated. So although the four Stirling engines are identical in efficiency to those used in Japan's Soryu-class diesel-electric attack submarines, the Chinese submarines are afforded more tactical flexibility. Before the liquid oxygen on board the submarine is exhausted, the submarine does not need to navigate with its snorkel extended to the surface, which puts it at the same level of performance as a small nuclear submarine.

This is what the 711 research institute has been working to address. According to a 2004 report by state news agency Xinhua, the engine developed by the 711 research institute has made a breakthrough in the technology. The new engine is said to have a 20 kW and a 100 kW model, said the website. The advantage of the engine is that it can be used together with other propulsion systems such as natural gas, diesel, solar energy or other solid fuels to generate electricity. This also reduces emissions compared to other engines on the market. This meant that back in 2004, China had almost equaled the power of the Swedish 110 kW 4-275 Stirling engine.

The website then speculated that the power of China's new generation of Stirling engine has likely reached the 160 kW or 217 kW mark. If new submarines were to use four Sterling engines, as the Type 039B submarine does, then this would mean power of 640 kW to 868 kW (868-1,180 horsepower). The engine would also drive the submarine at the same time as charging the battery. The Russian Kilo-class submarine has one 150 horsepower cruise generator and two emergency-use 102 horsepower generators.

This means that China's new Stirling engine can charge its main battery at the speed of a conventionally-powered submarine in snorkel mode, while travelling at a low speed of 2-3 knots. This is a unique breakthrough. Even the lithium battery powered submarine, which is under development, is unable to compete with diesel-electric submarines in terms of energy density and it still needs to charge its battery with its snorkel extended.
at Thursday, May 07, 2015