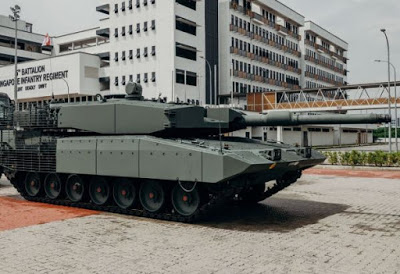 The SAF’s prevailing focus on homeland security and urban warfare is reflected on the Leopard 2SG’s many improvements. The entire hull is covered in a layer of applique armor, with thick side skirts and cage or slat sections protecting the flanks, and the turret’s frontal arc encased in removable composite panels. The armament of the Leopard 2SG remains the same–a 120mm smoothbore main gun paired with a coaxial machine gun–although a secondary machine gun on the turret roof is absent. The enhanced protection level of each Leopard 2SG is to guarantee its survival against multiple explosive threats, especially high velocity projectiles at close ranges such as the ubiquitous rocket grenades of an RPG-7.

The Leopard 2SG’s protection level and ability to function day and night (thanks to the commander’s oscillating thermal camera on the turret roof) gives Singapore’s ground forces a superb fire support vehicle in any conflict scenario where the full brunt of their mechanized fleet is required. Complementing the Leopard 2SG is the tracked Hunter AFV that entered service in 2019 whose armaments (a 30mm cannon and a tandem missile launcher) and mobility puts Singaporean troops far ahead of their regional peers. To date, no other military in ASEAN has fielded a locally assembled tracked fighting vehicle. The success of the Hunter AFV is giving ST Technologies a greater incentive to look for viable exports and improve the vehicle; one variant has the Hunter converted into a light tank with a John Cockerill turret.

Although Indonesia and Singapore both operate Leopard 2 battle tanks, Singapore’s variant is considered more advanced. In 2010 the German manufacturer Rheinmetall unveiled its “MBT Revolution” upgrade for the Leopard 2A4 that was later rebranded as the “Advanced Technology Demonstrator” or ATD. Externally, the ATD and the Leopard 2SG resembled each other but the ATD had additional features such as the ROSY smoke grenade launcher, an active detection and protection system, and a remote weapon station mounting a 40mm grenade launcher. MINDEF can add these same countermeasures on the Leopard 2SG in the near future but these plans haven’t been announced. Internally, the ATD’s analog controls within the turret were replaced with digital subsystems and Rheinmetall ensured the crew had 360 degree situational awareness.