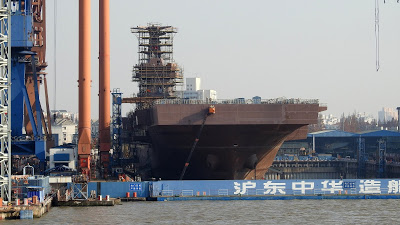 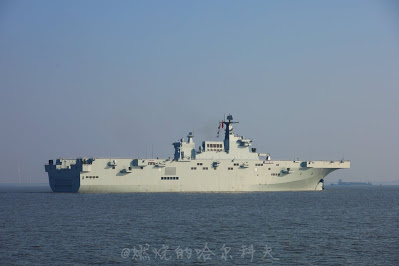 The first Type 075 landing helicopter dock (LHD) is not yet in service, and China’s third warship in the class is close to finishing construction. The hybrid warships promise to dramatically expand China’s amphibious assault capabilities.

On Tuesday, the second of China’s Type 075 LHDs took to the seas for the first time. Photos posted on Sina Weibo showed the 40,000-ton warship - part helicopter carrier, part amphibious assault dock - being escorted by tugboats out of Shanghai’s Hudong-Zhonghua shipyard and into the open seas.In April, the warship caught fire in the drydock as it neared completion. However, the damage was not serious, and it was launched a few weeks later. A US amphibious assault ship that also caught fire in 2020 was not so lucky: the US Navy announced the decision to scrap the USS Bonhomme Richard late last month, judging that repairs from the four-day fire would roughly equal the cost of building a new ship.

​The first Type 075 was recently spotted undergoing sea trials in the South China Sea, having been launched about eight months before the second Type 075.

In July, Sputnik reported on a proposal by the 708 Institute, a design bureau for China State Shipbuilding Corporation (CSSC), suggesting a modified version of the Type 075 with an electromagnetic catapult on the flight deck for launching fixed-wing drones. However, nothing has come of the proposed Type 076 as of yet. Instead, Hudong-Zhonghua is completing a third Type 075, with five more planned in the class, and is building a Type 071 amphibious transport dock for Thailand and a Type 054A frigate for Pakistan.

Meanwhile, the first Type 075 has been spotted anchored alongside the carrier Shandong at the Yulin Naval Base in southern Hainan. First launched in September 2019, the warship is going through the final stages of its sea trials, after which it will be christened with a name and join the fleet in the South China Sea.

The conjunction is perhaps the first known meeting of China’s two classes of aircraft carrier. Although smaller than the Shandong and incapable of carrying the fixed-wing aircraft it sports, the Type 075 can carry some 30 helicopters and is larger than the aircraft carriers of many nations, including Italy, Spain, Japan and Thailand.

Extensive fleet expansion for the People’s Liberation Army Navy is included in the recently drafted 14th Five-Year Plan presented last month. By 2025, Beijing aims to have begun construction on five more Type 075 LHDs, and development of the Type 076 “assault carrier,” which was reported on earlier this year, hopes to be in full swing, according to The Diplomat. However, the outlet notes the economic proposal conspicuously omits estimates on aircraft carrier construction. These capital ships are, of course, accompanied by a slew of new smaller warships, including the huge Type 055 missile cruiser.