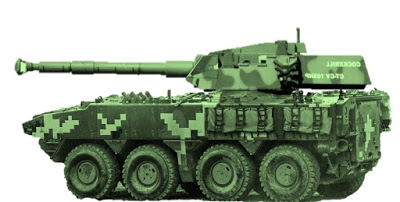 At the same time, four out of five armoured regiments (with the exception of the 5th Armoured Regiment), had previously being equipped with SIBMAS 6×6 Armoured Fire Support Vehicle (AFSV) with Cockerill 90mm gun. As has been explained earlier elsewhere in this blog, when the SIBMAS was introduce back in the 1980’s, these were seen as sufficient enough to counter the armoured threats in the region considering that most of the countries operating tanks at the time were of Soviet made light tanks or Western made examples like the AMX-13 (with 75mm gun) and Alvis Scorpion (with 76mm gun) tanks.

Having said that, the Army is yet to replace its ageing SIBMAS with a worthy successor. Perhaps it is worth to consider the Gempita as platform to accommodate Cockerill 105mm gun which does not only served as fire support vehicle but also as tank destroyer. These Gempita Tank Destroyers would operate in tandem with the LCT30 ATGM Gempitas already in service with KAD, making them a formidable tip of the spear while operating together with the Pendekar MBT currently in service with the 11th Armoured Regiment (11KAD).