Satellite view of Chinese Type 001A aircraft carrier under construction 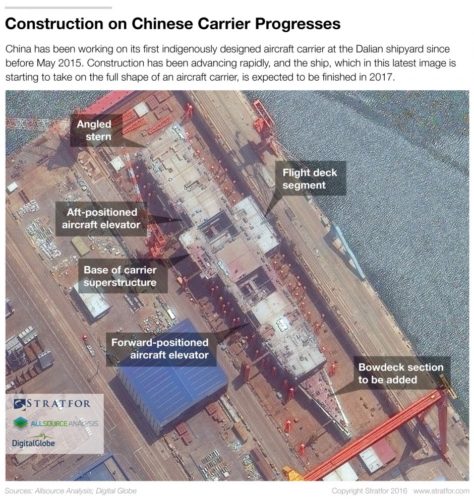 Satellite imagery reveals the progress China has made on its new Type 001A aircraft carrier project. Construction on the carrier began at the Dalian New Shipbuilding Heavy Industry Co.'s shipyard in northeastern Liaoning province in early 2015 and has since proceeded at a brisk pace. The imagery, acquired from Stratfor's partners at AllSource Analysis, suggests that the project is a modular construction, in which sections of the vessel are built separately and then fitted together, allowing for shorter build times and greater flexibility. At this rate, the Type 001A could be launched as soon as early 2017, though commissioning it into the fleet would take several years more.

China purchased its sole existing carrier, the Liaoning, from Ukraine in 1998 as a stripped hulk. The ship was fully rebuilt in Chinese shipyards and commissioned in September 2012. The Liaoning could someday serve a combat role, but it has functioned primarily as a training ship, developing carrier deck operations and training an initial cohort of pilots in at-sea takeoff and landing.

The new Type 001A aircraft carrier will follow the Liaoning's basic design, though slightly improved. Like the Liaoning, the new ship will have a displacement of approximately 50,000 to 60,000 tons, and it will feature a Short Takeoff But Arrested Recovery (STOBAR) system. STOBAR allows aircraft to take off under their own power, using a curved ramp for assistance; when landing, planes hook onto arrestor wires. STOBAR, though effective, is not as capable as the catapult system, known as CATOBAR, used on U.S. Nimitz-class fleet carriers. Relative to STOBAR, CATOBAR enables launched aircraft to carry significantly more fuel and greater payloads.

Therefore, the new Type 001A is simply a stepping-stone that will enable China to build up its aircraft carrier program while it develops carriers with CATOBAR systems and, perhaps, nuclear propulsion. In time, China could attain supercarriers of the same size and displacement as Nimitz-class carriers. But this is a distant goal. To reach a level of global operations comparable to that of the U.S. Navy, China will need decades of additional experience.
at Sunday, June 05, 2016