The Philippine Navy’s new Jose Rizal-class guided missile frigates will only get its first shipment of missiles starting from Octover 2021. 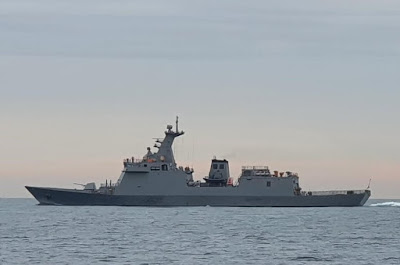 The Philippine Navy (PN) said Wednesday the surface-to-air and surface-to-surface missiles of BRP Jose Rizal (FF-150) and BRP Antonio Luna (FF-151) are scheduled for delivery in October next year and the first quarter of 2022, respectively.

"(Deliveries for) the surface-to-air missile is (on) October 2021 and March 2022 for the surface-to-surface missile," Navy public affairs office chief, Lt. Commander Maria Christina Roxas, said in a message to the Philippine News Agency (PNA) when sought for updates on the acquisition of primary weapons of the two guided-missile frigates.

Roxas said the surface-to-surface missile project is under "Frigate Acquisition Lot 2A" and that South Korean defense manufacturer LIG Nex 1 would deliver C-Star missiles. The C-Star is described as a "sea-skimming surface-to-surface anti-ship cruise missile".

The BRP Jose Rizal was delivered to the Philippines in May and commissioned last July, while the BRP Antonio Luna is expected to be delivered to the PN by February next year.The contract for the two ships was placed at PHP16 billion with another PHP2 billion for weapon systems and munitions.