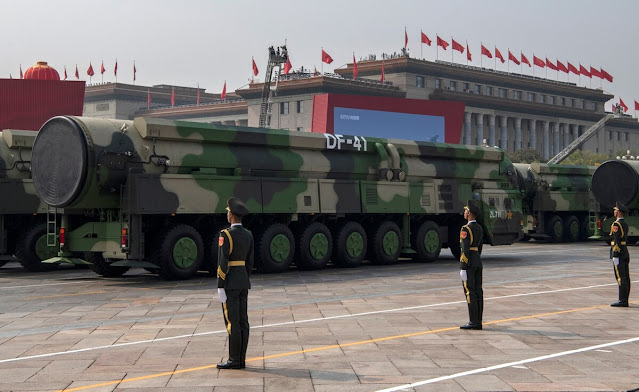 A paper published by the Chicago, Illinois-based Bulletin of the Atomic Scientists has estimated that China has 350 nuclear warheads, significantly more than that estimated by the U.S. Defense Department.

The report, written by Hans Kristensen, the director at the Nuclear Information Project at the Federation of American Scientists, and Matt Korda, a research associate at FAS, arrived at the number by counting both operational warheads and newer weapons “still in development.”

These weapons include hypersonic missiles, silo-based and road-mobile intercontinental ballistic missiles, and their submarine-launched equivalents, bringing the total number of nuclear warheads to more that the “low 200s” estimated by the Pentagon in its 2020 report on China’s military.The think tank’s report also said an estimated 272 of the 350 warheads in the People’s Liberation Army are operational. That estimate includes 204 land-based missile warheads, 48 submarine-launched warheads and 20 aircraft-delivered gravity bombs.

The latter mission had been dormant for a while, although it has recently been reconstituted with China said to be developing an air-launched ballistic missile with a possible nuclear capability. A Chinese Xi’an H-6 bomber was recently seen carrying what is believed to be a mock-up of a hypersonic boost-glide missile, although its development status is unclear.The estimate of 350 nuclear warheads does not include the suspected air-launched ballistic/hypersonic missile, nor does it include the multiple, independent warheads that will be fitted on the DF-5C ICBM, potentially further increasing the size of China’s nuclear stockpile even after accounting for the retirement of older systems.

Nevertheless, the report noted that the size of the Chinese nuclear stockpile is still significantly below that of the United States and Russia, which have thousands of nuclear weapons in their respective stockpiles. The authors wrote that claims by the Trump administration’s special envoy for arms control, Marshall Billingslea, that China is striving for a form of “nuclear parity” with the U.S. and Russia “appears to have little basis in reality.”

It also added that China has traditionally maintained a low alert level for its nuclear forces, with most warheads at a central storage facility and smaller numbers kept in regional equivalents.