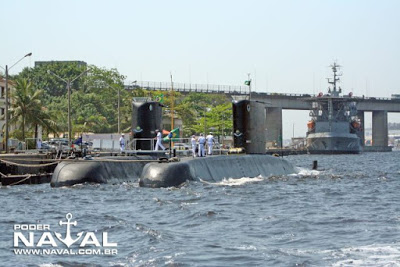 The Indonesian Navy is in an advanced stage of negotiations with the Brazilian Navy to take two of the four IKL-209 submarines belonging to the Submarine Force (Força de Submarinos - ForSub), which are being made available to the international market, due to the wide renovation of the flotilla of Brazilian submersibles.Indonesians operate two Type 209/1300 ships, commissioned in the early half of the 2000s, and three others, Type 209/1400, built by the South Korean group Daewoo under license from the German company Thyssen.

According to the American NGO “Nuclear Threat Iniative”, the most modern of these 1400 boats - 405 Alugoro -, launched at sea on April 11, 2019, has yet to be formally commissioned by the Indonesian Naval Force, which is expected to happen this year.According to the "Poder Naval", with a source from the Navy Command, in Brasilia, it reinforces the Jakarta Government's interest in Brazilian ships, the fact that the admirals of the Asian country positively see the possibility of maintaining themselves in the operation of submarines with German technology, as are the ForSub moored at the Almirante Castro e Silva Base, in Guanabara Bay.