Negotiations Under Way with Indonesia over Fighter Jet Project 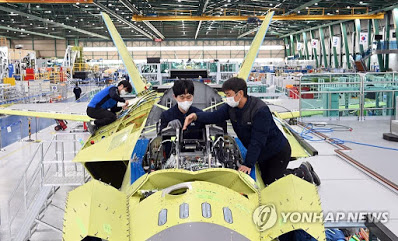 South Korea is in talks with Indonesia about a joint project to develop a next-generation fighter jet, the head of the arms procurement agency said Tuesday, amid speculation that the Southeast Asian nation wants to quit the project.Indonesia agreed to partner in South Korea's KF-X project aimed at developing a new fighter jet by 2026, and promised to shoulder 20 percent of the total development cost of 8.8 trillion won (US$7.3 billion), or about 1.7 trillion won.

But Indonesia stopped making payments after investing 227.2 billion won, with around 600 billion won overdue."We are in the process of sounding out each other's position," Kang Eun-ho, chief of the Defense Acquisition Program Administration, said during a press briefing. "We will elaborate in detail when the time is right."

Indonesia's initial goal was to procure aircraft for its air force and advance the country's aerospace industry through the partnership but foreign media have been reporting that the Southeast Asian nation is now pushing to sign a deal with France to purchase new fighter jets.South Korea has been working on the KF-X project since 2015 to develop a homegrown cutting-edge fighter aircraft to replace the Air Force's aging fleet of F-4 and F-5 jets.

In September last year, Korea Aerospace Industries Co. got down to the final assembly of a prototype that is expected to be made public by April.When the development is complete, 40 units are planned to be delivered to the Air Force by 2028 and another 80 units by 2032, officials said.Meanwhile, Kang also vowed to thoroughly prepare to secure a light aircraft carrier for the military, saying that multiple researches are under way for the project."We will make thorough preparations to make sure there are no setbacks in pushing for the project when the budget is secured at the National Assembly," he said.